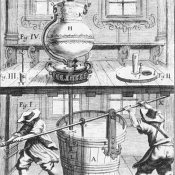 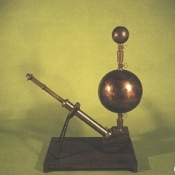 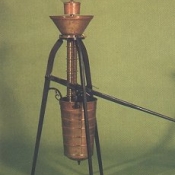 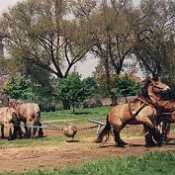 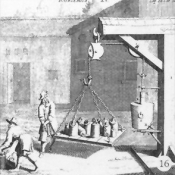 “I have no reservations to say frankly and courageously that I have never seen, heard, read or comprehended anything more wonderful in this field”.

Unfortunately, this is not the statement of one of our customers – and definitely not from one of our competitor‘s customers – but of Kaspar Schott, professor of mathematics from Würzburg, made in 1945. He was moved to this statement during the presentation of the very first vacuum casting machine that had ever been built and that has had an effect on so many fields up to now.

Therefore, we would like to summarise the story of the man who built this machine and who inspired so many further technical developments: Otto von Guericke from Magdeburg (1602 – 1686).
He was not an inventor in the true sense of the word, but a “jack of all trades”. He was mayor, a treasurer and delegate, engineer, architect and natural philosopher.

Especially with regard to the last mentioned profession, he was very much interested in natural scientific coherences, above all in the subject of vacuum space. Since antiquity, the existence of vacuum space had been denied, particularly as the theologians of the Middle Ages regarded the idea of void, or complete emptiness as a kind of blasphemy.
Guericke was aware of the delicacy of his experiments and therefore avoided theological discussions by using a clever linguistic ploy. He replaced the critical word “emptiness” with a simple physical one by distinguishing between “emptiness” and “empty space”. His empty space did not mean “void” but it was just an air-evacuated space. Using this ploy he was able to carry out his spectacular and meanwhile world-famous experiments with the Madgedurg Hemispheres without being unchallenged.

Beside this world-famous experiment, Otto von Guericke used the vacuum for many other demonstrations. At the Reichstag in Regensburg, he demonstrated that water flows upwards against its natural flow-direction into an air-evacuated glass container or that a candle extinguishes very quickly under vacuum or that, despite the obvious hammer blow against the bell, a clock does not make an audible sound. He could also report from a long-term experiment that grapes could be conserved under vacuum for half a year.

In the Reichstag at Regensburg, Guericke learned, that he was not the first one to prove the existence of vacuum. In 1644 Evangelista Torricelli, a student of Gallilei, had already succeeded in proving this. Nevertheless, the development of a technical instrument to evacuate an air-filled container can be regarded as Guericke’s great achievement. He constructed his air or vacuum pump based on the principles of the fire extinguisher, he only changed direction of the pumping/suction actions.

Guericke was not much interested in the technical realisation of his discovery, but shortly after other scientists began taking up his idea. There is a direct connection between Guericke’s vacuum pump and the Watt steam engine.
Even Guericke could not predict that one day the vacuum would be of great importance to the modern sciences and technology. Without the extensive technical employment of the vacuum technology in the industry, there would be no electrical bulb, no computer chips, no basic research with the particle accelerator and above all no vacuum casting machines for Rapid Prototyping. The modern world would be an empty place without the vacuum.
At the end of the chapter we would like to quote Otto von Guericke, who also discovered electrostatics. The following statement of the practitioner von Guericke is still valid:

Everything that has been proven by experience or sensory perception should be preferred to any plausible or brilliant conclusion, as a lot of things seem to be true by thinking or speculating, but finally cannot be proved in practise.