MK Technology manufactures various types of slurry tanks. 5 standard sizes are available, quite often special sizes and special solutions are built. The smaller tanks up to 50 litres are built up conventionally, that means the barrel rotates and the blade is fix. This is the most common and simplest solution from the technical point of view. If the tank should be bigger and if zircon slurries are used, this version reaches its technical limits: with a total weight (barrel and slurry) of more than 10 tons, no bearing will have a long life expectancy under the given operating conditions.

This is why we have developed a new system, which has a lot of advantages. Instead of the barrel, the mixing paddle rotates, which decisively reduces the bearing load. Instead of turning many tons continuously over a period of months, only some hundred kilograms have to be driven in this version – a decisive factor for the service life of the whole system. Besides of the significantly increased service life, this system has other advantages:

Thanks to these advantages, it was possible to build the world’s largest serial slurry barrels, which are able to mix more than 20 tons of slurry perfectly and without interruption – and that for several years already (see also video)

For prototpye construction and for the manual work, we offer a small slurry tank combination. Two 170 litre tanks are combined in a mutual casing, each barrel is covered by a pneumatically driven sliding door and the overall system is air-conditioned.

This is the perfect solution to manufacture smaller trees. The system can be set up quickly and it is ready for operation after the slurry has been filled in – there are no time-consuming installations.

Besides of the serial systems, we also offer custom-made solutions. There are, for example, special solutions to use the very expensive yttrium slurry to manufacture titanium casts as effectively as possible. Almost everything is possible, and a request or a visit in our technical centres would be worthwhile in any case. 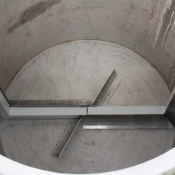 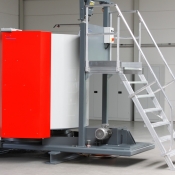 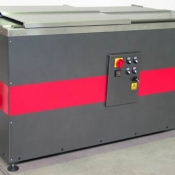 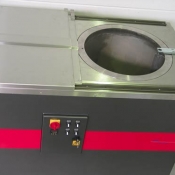 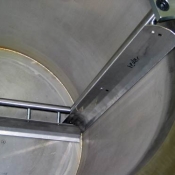 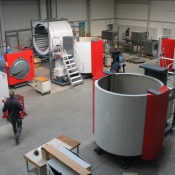 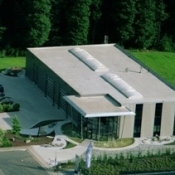