This casting technology was originally developed for the jewellery and dental industries, for the production of comparatively small parts. As the production time is relatively short compared to conventional shell building, it is also being applied more and more for Rapid Prototyping.  In the embedding machine a chalky powder is mixed with water under vacuum and poured over the wax part, housed in a small metal container, the so-called flask.

After solidification of the plaster, the flask is heated to a casting temperature of 300 – 500 °C, step by step. It is then cooled down depending on the material.

After the cast the part is de-bedded by means of a high-pressure water-jet to release the part from the plaster. The part is then sent for finishing. 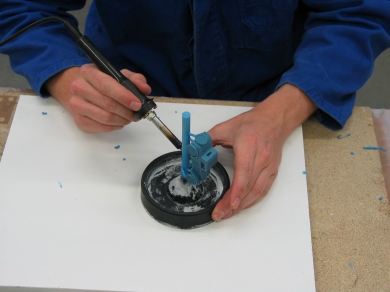